Fixing a Bad Start Button on a Sharp  R-220HW Microwave 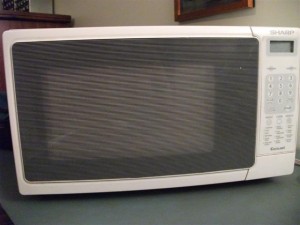 “What? Fixing a microwave?  Isn’t that like fixing a ball point pen?  After all, microwaves go for like $30 new! ”  Yes, that is true.   They are cheap and very available.  But on the other hand shopping, spending money, and throwing things away are not my favorite activities.  I was willing to bet that by the time I would have shopped around, gotten the microwave, and set it up I could have simply fixed the one I had.  No stores, credit cards, or stupid trash tags without at least totally breaking the one I had.

A quick search of my problem resulted in lots of threads talking about people describing  the same issue I was having with responses that seemed to be simply guesses.  Even worse — the OP didn’t bother to say how the problem was fixed, or why it didn’t get fixed.  So here are all of the details (with photos!!!)  of how I repaired the faulty switch on my Sharp model R-220HW microwave.

To define the problem, the start button on my sharp microwave would only work some of the time.   Through exhaustive testing (pressing the button again and again until it would finally heat up my damn leftover dinner), I was able to determine that the top edge of the button worked best.  Also interesting, after I got her going once the start button would work great for a while.

I’ve wrestled with all kinds of connector problems in the past such as fretting, outgassing, and corrosion in connectors, so my first shot from the hip was to check out the start switch.  I also recognized the film-over-switch (AKA membrane switch) design which meant I just had to use my xacto knife to peel up the coverlay over the buttons and test my theory without even opening up the case! 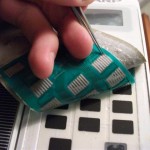 With the correct layers of the coverlay removed, I was able to test my theory and found that the switch was indeed bad.  Touching both sides of the printed switch with a set of tweezers gave me a reliable START response from the microwave.  I could almost taste what was going to become my reheated gluttonous reward by this point.  All I had to do is solder a couple wires onto the high-temperature PCB, strain relief it, and tape it up! 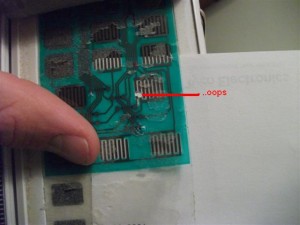 ….Except that it wasn’t a nice, high-temperature flex board.  Instead, this PCB seemed to shrivel at the mere sight of my iron.  Oops.  Time to get the screwdriver out and open this puppy up.

After getting the front panel’s board off, I was able to see that I could have tried soldering my wires on the nice FR-04 PCB behind the panel instead of torching the plastic-bag-PCB on the front.  By tracing the tapes from both sides of the switch back to the connector, I was able to find that it was pins 2 and 6 on the board (counting from the pin on the lower-right and along the bottom edge).  Note that the front panel switches used the same flexible-bar connector as the LCD display uses, so some guess work was employed in my counting of the pins. 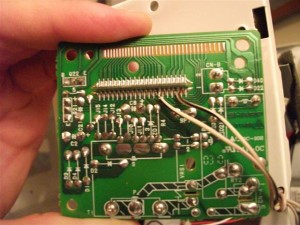 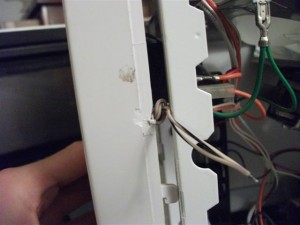 When doing work on a $30 microwave I’m not a fancy fella, but it needs to be reliable.  I’m willing to accept wires hanging out of the side of the box, but to add some strength I tied a knot in the wires and cut a notch in the plastic case to thread the wires through for strain relief. 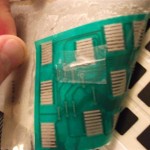 With the wires soldered and the case put back together (Because of the high V power supply, microwaves should be unplugged while being worked on), I successfully tested my new start button.  Now to look back at that torn up trace on the flex board.  This signal line was also used for the power level and stop button.  A quick strip of aluminum foil was all it took to jump the burn hole, along with a little tape to hold it in place!

After adding a momentary switch to the shopping list for my next digikey order, a quick note on the front to explain why wires needed to be shorted polished it off.  Even with the flex board melting, in less than an hour I was scarfing down my tasty dessert! 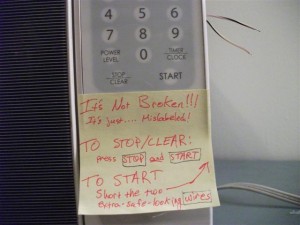 Note: The Stop/Clear note was added in case the aluminum strip got unstuck and needed to be pressed to make the connection. However this has yet to come up!

This entry was posted in Designs, Fixin', Projects. Bookmark the permalink.