I currently drive a 2005 Chevrolet Cobalt which is a remarkable automobile in the most fundamental sense: providing reasonable transportation for a reasonable cost.  She currently has ~102k miles and going strong.  Although this last year I’ve had both of my keyless entry systems fail.  Since I’m the only one who usually drives the car, the solution was to switch the broken one out for the working one.  However the second keyless entry remote FOB failed last week, leaving me with only the key to access my car.  It’s a particularly big hassle since the alarm goes off when the door is unlocked and opened with only the key.  Ugh.

As with any failure, the first step is to understand the problem.  This involved cracking both broken units open to determine what might be the issue.  I was hoping for a dead battery, but no dice.  Each unit had a different, more significant problem:

The first unit had a bad solder join on the battery holder.  I love these problems.  2 minutes of soldering and I’ve repaired something that would cost well over $100 to replace, not to mention a trip to the dealer.  Yet another reason that anyone who owns anything electronic should have access to at least a cheap soldering iron :). 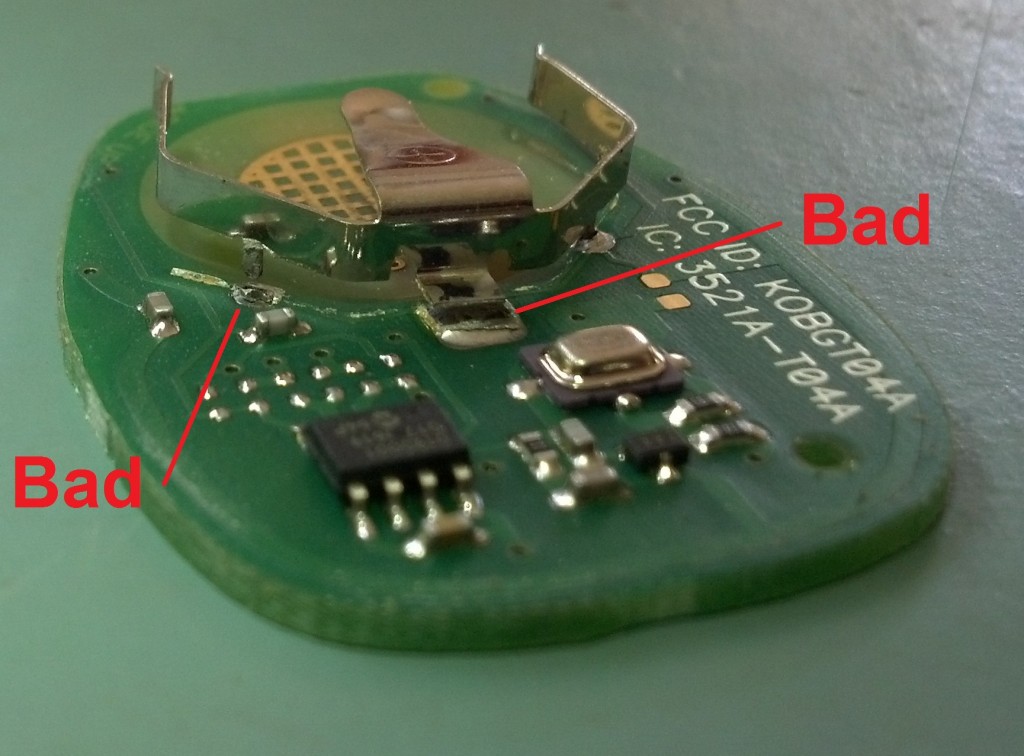 After the first unit was repaired, I was hoping that the second unit had the same problem.  But when exploring it, I found that the trunk button worked great; it was the lock and unlock buttons that would not operate :(.  To test the silicone rubber keypad, I opened the unit and used the end of a flat head screwdriver to short the two exposed PCB traces, activating the switch.

This worked beautifully, suggesting that the carbon pill on the silicone button had worn out and is no longer conductive.  I measured the resistance of the carbon pill for the failing buttons and compared it against those of the working trunk button.  Sure enough, the working function had a resistance near 1Mohm, while the broken switch couldn’t get a decent reading.

To solve the problem, I brought out my conductive epoxy that I picked up years ago from the online surplus supplier, Electronics Goldmine.  As with most surplus stock, they don’t sell it any more.  But I’m pretty sure it’s simply normal glue with carbon dust mixed in.  After dabbing a little bit of glue on the carbon pill and allowing it to dry, I tested the switch and it worked great!  After pressing the refurbished switch many times, there was no dust or residue left on the PCB traces suggesting that it could work for a long time.  Although with these budget hobby solutions, there’s no telling how long it’ll last.

And there you have it!  Two different reasons a keyless entry system could fail, and how to fix it.  All for less time and way less money than replacing them.  The same steps should also work for any carbon pill switch.  Most TV remotes, garage keypads, calculators, and test equipment all use this type of switch.

This entry was posted in Engineering Life, Fixin', Projects. Bookmark the permalink.